Put a bit of a swing in your Oracle Apex mobile apps by using the JQM smartphone UI application interface now available in Oracle Apex 4.2.

The interface enables you to put page transitions to your apps, define JQuery lists and much more. Here is the option:

I have been playing around creating mobile apps in Oracle Apex for a while now trying various ways such as adding Javascript to HTML content regions, running javascript from PL/SQL, you name it. The JQM smartphone UI is a great improvement. See for yourself. Below is the JQM smartphone version of my famous :-) beachmap app (Twitter: @beachmap) Currently you can only browse beach locations, soon I will add ability to add your own beaches (crowdsourcing). 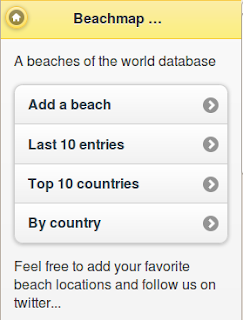 Posted by Kubilay 2 comments:
Email ThisBlogThis!Share to TwitterShare to FacebookShare to Pinterest

I have been toying with the idea of using both Oracle Apex with JQuery Mobile as an application development platform for a while now. Why not? You get a great database and a Mobile UI design framework to built your mobile apps just using your browser!

I managed to create few apps on this platform. This post is about what tools I used when I was developing the apps.

This one was easy, just go to http://apex.oracle.com and register for a workspace. The workspace gives you an Oracle Workspace Schema, like a login (schema) to Oracle. Then you start developing Web applications just using a browser. Oracle Apex renders your pages in HTML and you use SQL and PL/SQL for your logic. Most of the pages are decorated with pre-built templates or custom CSS and templates you create.

Your app becomes a web app, read by browsers. To make it look like a mobile app you can use Jquery Mobile . A framework which enables you to further customise your Oracle Apex page regions and make them look like mobile apps.

Oracle Apex 4.2 - the upcoming release - will incorporate the JQuery Framework within itself as standard and building mobile apps will become native to Oracle Apex. If you want an Early Adopter release is available on this link: http://apexea.oracle.com

Below are few mobile apps I have been developing

The School Proximity app calculates the radius between two circles and draws a circle on Google Maps.

The Greekisland app is a mash up of Google Maps, Yahoo Weather and Google Charts APIs, dynamically querying the weather reading and temperatures on Greek islands.

The beachmap app is a test I did on Custom Authentication with Oracle Apex. Where you can register with your email and add beach locations around the world.

All you need to do apps like this is two things really
It was a great learning process. Now, with REST API and JQuery Mobile in the horizon for Oracle Apex 4.2, I see a great potential with Oracle Apex!


The other day I watched the Oracle Big Data forum. Now available here. A half-day event with various speakers on the subject of BigData, including Tom Kyte , a mentor who I admire!

In the forum they have gone over Oracle's approach to Big Data and allow me to summarise it below:

Looking at the summary above, it really describes Big Data as something as ... a distillation of a massive amount of data ... two questions come to my mind:

Answering the second question is easy. We want Big Data because is all about having detailed information to allow us to make better decisions. Classical "Your Boss's Decision Making" use of data, if you work for business. If you work in astrology probably the question will be: "Is there life in space?"

The first question, "Where is Big Data?" I think is the one which will probably take more time and effort to answer. Or maybe if we slightly re-write the question to "Where can I find Big Data useful for my Business?" would be even more correct to say, as Big Data must make money, too. In a summary, this was what Oracle said, or at least what I understood from it. Very interesting indeed. Oracle looks at Big Data as another data source which is cool too.

Below is my rumblings on the topic of Big Data

Let me start by saying that, there were many interesting examples used to describe Big Data in the Oracle forum. For some Big Data is things such as the heartbeats of patients collected. For others, as data collected from petroleum pipe sensors on oil rigs. Other descriptions saying, that BigData is sensor data, accumulated during flights (apparently 7TB on a flight between London and New York) and more Big Data is Machine Data or even Big Data is Dark Matter!

Wait a minute, does this beast fit in a NoSQL value pair database! Bob is your uncle! It fits somewhere, then. But where? In NoSQL. A loose database with no Constraints - where constraints and the whole database logic is in the hands of the web app developer. I am not defending relational databases here, just arguing on the new NoSQL theory. NoSQL, a database which is not based on the sound and proven mathematics of Relational Theory, Calculus and Algebra, a database which is hardly transactional and not consistent (eventual consistency) and integral. Hmmm.... Whatever, as long as Big Data fits in a NoSQL database and we can capture it, is fine. Capture now, analyse later. Just store and spread it out. Then bring in all the metal and CPU and memory in the world (in parallel) to crunch this. What a Great idea!

I am persuaded by Big Data. Not all data needs to be stored relational, and ACID is a theory of transactions and not a must have database property.

What bugs me is, now that we are taking away all constraints and logic from database data and allow it to grow to Big Data, when we look back at it, how quickly will we be able to relate other data to it and how easy will it make sense? I am just looking forward to any sort of easy to use prompt (like Pig and Hive) where I can write something like:

but in the cloud, as I will never be able to afford the metal to host big data anyway, should be fun.

All Watched Over by Machines of Loving Grace

All Watched Over by Machines of Loving Grace


I like to think (and
the sooner the better!)
of a cybernetic meadow
where mammals and computers
live together in mutually
programming harmony
like pure water
touching clear sky.

I like to think
(right now please!)
of a cybernetic forest
filled with pines and electronics
where deer stroll peacefully
past computers
as if they were flowers
with spinning blossoms.

I like to think
(it has to be!)
of a cybernetic ecology
where we are free of our labors
and joined back to nature,
returned to our mammal
brothers and sisters,
and all watched over
by machines of loving grace.

Posted by Kubilay No comments:
Email ThisBlogThis!Share to TwitterShare to FacebookShare to Pinterest

I have built this Mobile Oracle Apex app on a hosting provider showing temperatures on Greek islands. I used jQuery libraries and Oracle Apex Templates. This is a learning prototype.

I am thinking of enriching the database behind this app with other relevant info.

To reach the app point your iPhone to URL below: